The foothills of the Kuznetsk Alatau

The section is situated in the Ust-Abakanskiy district of the Republic of Khakasia, near the Azyr-Tal ridge of the Batenevsky low mountain ridge of the Kuznetsk Alatau mountain system.

Landforms. The relief of the section is medium-mountain. The slopes of the ridges of different exposition are asymmetric: the northern are gentle, stretched, covered with forest; southern – steep, rocky, often woodless. The elevations composed from the ancient chalkstones, independently from the exposition, have usually steep rocky slopes.

Soils. The steppe southern slopes are covered with the common humus, mainly shallow and rubbly one. In the wide dry ravines you can find common humus. Cespitose carbonate soils are on the chalkstone in the forests. 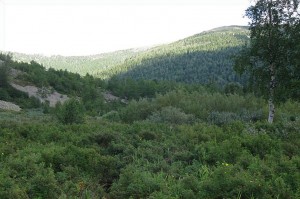 The scopes of the Hol-Bogaz