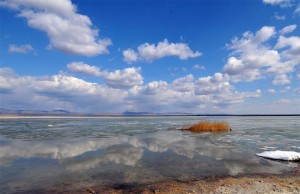 The section is situated in the Ust-Abakanskiy district of the Republic of Khakasia, on the right bank of the Kuten-Buluk River. Lake Ulug-Kol is situated in the southern part of the section. The northern part of the section includes the southern slopes of the low Azyr-Tal ridge, which then comes to the Uybatsky steppe with a spacious plain territory of the lakeside hollow of Lake Ulug-Kol.

Landforms. Lake Ulug-Kol is a shallow, drainless water body, with bitter and salty water. Its total area is 700 hectares, the depth is 1 meter. The lake is surrounded by mainly Cespitose gramineous steppe. The northern and western shores, where three small brooks fall in the lake, are occupied with spacious swamp and alkaline lands. The offshore coastal strip is mainly represented by mud bars.

The landforms of the section are composed from hills and ridges. In such droughty climate the periodical precipitations in the form of shower lead to the appearance of salty karsts because of washing salts out of the soil. 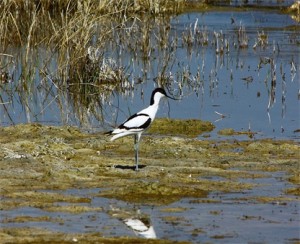 Soils. The soil covering can be characterized by the prevalence of southern, mainly shallow humus. The majority of them are of heavy texture. Alkaline lands and saline soils are observed in the lake’s hollow. The strip of salted soils near Lake Ulug-Kol is very wide (to 1 km), a large territory is occupied with aqueous and plump alkaline lands.

In very dry years the lake sometimes gets dry to the very bottom, leaving the muddy crust on the surface, which is overgrown with rush and reed mace.

The animal world is represented by 5 reptile species, 2 amphibian species, 126 bird species, 14 mammal species, which are referred to 5 orders, including 2 mammal species listed in the appendix of the Red Book of the Republic of Khakasia. 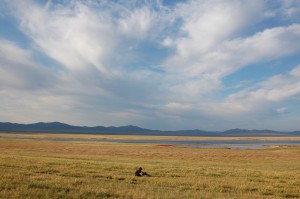 The scopes of the Kamyzyaksky steppe

Lake Ulug-Kol is the Key Ornithological Territory with the International status. This is the largest place of habitation of avocet, listed in Red Book of the Russian Federation. Many bird species, listed in the Red Book, stay there in spring and autumn during the transmigration. In August the birds’ agglomeration with the total number of 5-8 thousands of specimens is formed near the lake. During the spring and autumn migrations, this place is the intervening stage of the transmigration for thousands of ducks, geese, swans and especially avocets.