The head of the Abakan River

The section is situated in Tashtypsky district of the Republic of Khakasia, in the medium-mountain part of the northern macroslope on the Western Sayan Mountains, in the interfluve of the Maly Abakan and Karasuma Rivers. The rivers’ basins separate the Chuk-Chut ridge, which passes through the “Maly Abakan” section and divides it into two equal parts.

The hydrographical system is well-developed and represented by numerous streams and small rivers. The greatest river is Maly Abakan River. Kayla, Otkyl, Tartash, Karasuma and Kabansug rivers are the small rivers. All the rivers have the mountain nature – their flow is disturbed and turbulent, they have a plenty of rapids, rifts and riffles. In the high-mountain part the numerous small mountain tarns are situated.

Soils. The soil distribution is conformed to the law of altitudinal zonation. The experts single out about 12 types of soils in this territory: from mountain-tundra to mountain chestnut and alluvial ones.

In forests (at a height of 700–1500 m) the mountain forest and mountain sod-podzol soils are widespread, then they are replaced by mountain meadow soils in subalpine meadows. A wide areas of high mountains are occupied with stone and detritus slide-rocks of granites, slates, serpentinite with absent or underdeveloped process of soil formation in them. 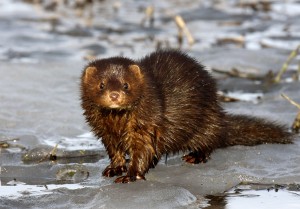 The “Maly Abakan” section structure includes the high-bonitat cedar forests and highlands as places of rare animal species habitation. In addition, the location is remote from the human settlements and difficult to access.

Two mammal species appeared there not too long ago: American mink adapted for leaving there in 1955 and boar, which came there from the Republic of Tuva, settled in the northern macroslope of the Western Sayan in 1970. Except these animal species, there is the information about the founding Asiatic ibex and Siberian argali near the southern borders. The traces of snow leopard can also be found near the southern border of the section.