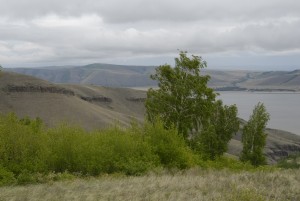 The bank of the Yenisei River

The section consists of two parts; it is situated along the left shore of the Krasnoyarsky Reservoir, among the Oglahty mountain massif in the Bogradsky district of the Republic of Khakasia. The protected territory embraces a part of the Oglahty ridge, which separates the Minusinsk and Sydo-Erbinsky Hollows.

Landforms. The relief is hilly. The major part of the “Oglahty” section is occupied with steppes and meadows. The banks, undermined by the Yenisei River, stretch along the eastern border of the section. Cuestas and ridges are typical for the southern border of the section. There are quite deep hollows and ravines between cuestas. Two ravines are the most evident: Bolshoy Abrashkin and Maly Abrashkin. The considerable relief ruggedness, various steepness and slopes exposition define the great diversity of the relief.

Soils. The soil covering can be characterized by the prevalence of southern and common humus, covering the gentle slopes. On the mountain tops there are underdeveloped detritus soils. All soils are of heavy texture. Along the northern slopes, covered with forest, the sod-podzol soils are spread out.

There is no water source in this section, so the water regime forms from the atmospheric precipitations. In spite of this, there is mainly high grass in the forests of the reserve, these forests are difficult to pass through, the projective cover of the herb layer is 100% and the height of the herbage is 100-120 cm long

Badger has the great area of distribution in the “Oglahty” section, that is why there is so many badger’s towns, paths and roads, which can come up to 0,5 meters breadthways. The migration route of Siberian roe deer passes through the territory of this section.