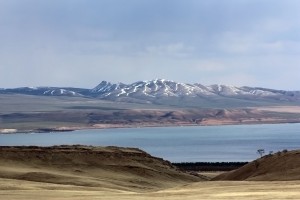 The section is situated in the Shirinsky district of the Republic of Khakasia. In the structure of the protected section included not large part of the basin of southeastern part of Lake Shira and lower course of the Son River, which runs along the swamped waterbed and falls into the lake. The estuary of the Son River is the only watercourse feeding the lake.

Landforms. The landforms of the section are slight hilly, almost plain, includes lakeside terraces and swamped valley of the Son River, falling into the lake. Lake Shira itself is strongly mineralized basin, which has high therapeutic qualities. The length of it is 9,5 kilometers and width is 5 kilometers. The depth does not exceed 22 meters. The reserve occupies the water area of 201 hectares (5,6% from the total area of Lake Shira).

Soils. The soil covering is represented by common and southern humus in aggregate with solonetzic, saline and meadow soils. For all soils the wide spread occurrence of detritus and gristly forms is typical.

During the bird passages whooper and Bewick’s swans, geese and ducks stay on the lake. In winter a snowy owl can be found there.