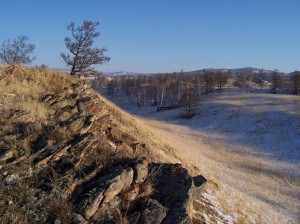 The section is situated in the northern part of the Republic of Khakasia, in Ordzhonikidzevskiy district, in the lee side of the slope of Kuznetsk Alatau mountain system. It occupies the western part of the Chebakovsko-Balahtinskiy Hollow in the interfluve of the Cherny and Bely Yus Rivers, upper in 12 km than their confluent.

Landforms. The section is situated in the intermountain hollow and represents a combination of steppe, forest steppe, water swamp and inundated communities. It includes three relief types: cuestas and ridges, plain and relief of the river accumulation. The valley of the Kizilka River is swamped and it stretches from southwest to northeast, joining the bottomland of the Bely Yus River. There are a lot of small lakes among the swamp. In the northern part of this section there are two mineralized lakes “Listvenkas”, which are situated at 150 meters distance from each other. These lakes are not too deep: depth of them is about 7-12 meters.

Soils. The steppe lands are covered with the common humus, often rubbly one. The dark grey forest soils develop in the forests. Meadow and meadow saline soils are in the valleys. Not too much of alkaline lands, saline and solonetzic soils can be found in the valley of the Bely Yus River, lakeside depressions and closed hollows.

In spring and autumn moose come to the swamped bottomland of the Kizilka River. It is sometimes a couple of adults, sometimes a female and a calf. In winter lynx comes there regularly, in summer there can be found the traces of a brown bear.

The migration route of the Siberian roe deer passes through this section (October – November), its total amount increases at that time and sometimes the groups of 30 specimens can be found.