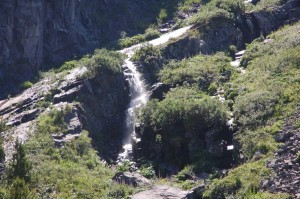 Khakassky Reserve’s workers have recently visited Agafia Lykova and brought some household items, food, and other things she asked for. We regularly visit Agafia and take care of her, especially after she started living alone without a neighbour. Thus, on May 23rd three workers of the reserve came to Agafia. On May 21st Father Vladimir, Agafia’s spiritual guide, and Nikolay, a son of the deceased Erofej Sedov. 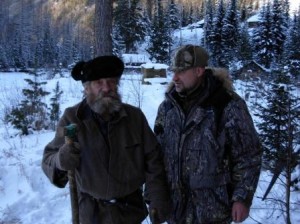 Erofej Sedov (on the left)

A geologist Erofej Sedov was one of the members of expedition when the Lykovs were found in taiga in 1978. He took care of Agafia and her father when they got seriously sick and could not take care of themselves. After retirement Erofej moved to taiga and settled not far from the Lykovs’ house. By that time Agafia’s father, brothers and sister died and she was all by herself. 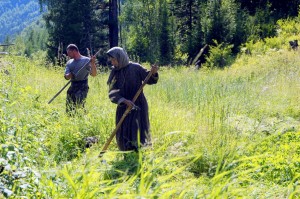 In order to help with household in December, 2014, a churchman decided to stay with Agafia. However, there are so many things to do, that even together they barely manage to do everything they need: to spade the garden up, plant vegetables, make hay, and chop wood. Besides, because of humidity and weather conditions the wooden house constantly needs repairing.

Considering this, the reserve’s workers tried to persuade Agafia to move to the city, where it would be much easier to take care of her. Unfortunately, she refused to leave her house referring to a possible decline in health outside the native places. The Khakassky Reserve is always ready to help Agafia move to the city and will keep visiting and helping her.